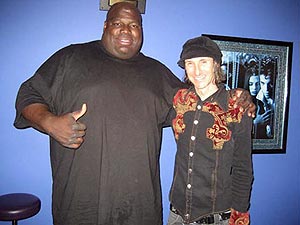 Me and Snoop's bodyguard Galaxy.
I'm 6 foot, 1 inch by the way! While on holiday in Australia, recovering from the crazy year that 2006 became, the most unexpected happened: I got a call from Snoop Dogg's manager... "Snoop wants to lay down some tracks, can you do it?"

Snoop had come to Australia to make a special guest appearance at a large outdoor festival along with the Beastie Boys... "He just wants to do one or two songs. It will be like an 8 hour thing. We are on our way to the studio right now. Can you meet Snoop there in 30?

I immediately canceled my fine day at the beach with friends and drove to Studio 301 at incredible speed... 4 DAYS LATER, much inhaling, drinking blue Gatorade, eating waffles and fried chicken... 8 songs are recorded! Thank you very much! See you back in LA! YoopeeYo YoopeeYaY !